Usually when I load data into a data warehouse I retrieve only the changes.  Since changes are normally applied to the most recent records doing a lookup on the natural key of the current record and a partial lookup for any that are not associated with that record for type 2 works out well.  I recently had a situation where I needed to reprocess the entire table for every run.  We won’t go into why this was the case.  Needless to say it’s not good.  Consequently performance was horrendous because 70% of the lookups were partial.
My solution was to use a Merge and Conditional Split to look at the entire dimension table. 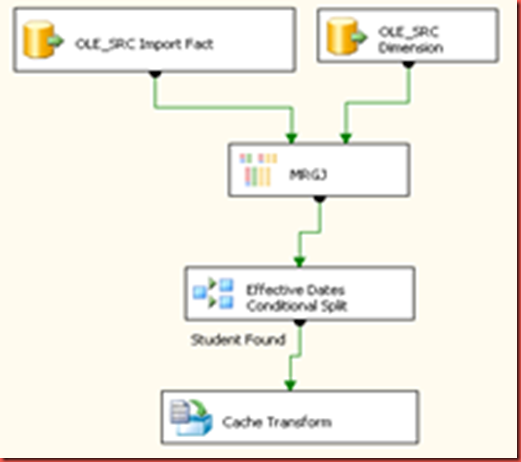 Let’s start with the dimension (OLE_SRC Dimension).  We’ll use DimStudent as the dimension.  Here’s the query I used

I’m pulling the surrogatekey (StudentID), Natural Key (StudentNaturalKey) , EffectiveStartDate, and determining the NextEffectiveStartDate instead of using EffectiveEndDate because the data warehouse may have gaps or overlap in the dates.  I’m going to join on the NaturalKey in the Merge Transformation so I’m using it to order by.

This is the source import query


I’m pulling back the NaturalKey and RecordDate from the source and ordering by StudentNaturalKey for the Merge Transformation. 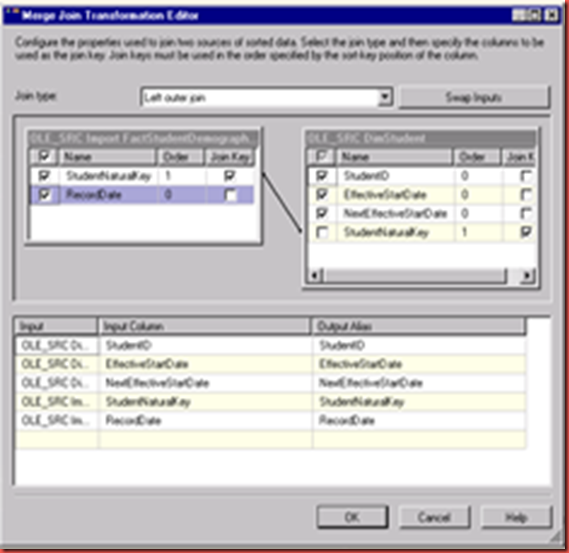 I then load the matching records into a cache connection manager.  This isn’t the only way but because of the complexity of the transformation dataflow I’d have to use the sort transformation for the merges so caching and then using the lookup transformation performed much better. 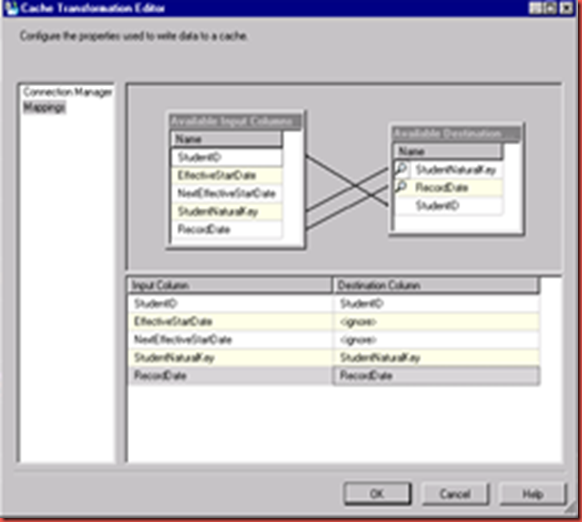 The cache consists of the natural key, record date, and StudentID.  I look up on the natural key and record date to get the surrogate key.  This allows me to keep the number of records to a minimum as records are often loaded in batches with the same record date.
Posted by Angelia Thompkins at 7:15 PM